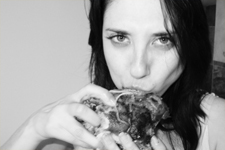 Yana Toyber was born in the Ukraine and moved to New York City at the age of two.

Her career as an artist started as a dancer with the NYC ballet. At the age of 11 she performed while attending the School of American ballet on scholarship. Entering her teen years Yana found ballet to be too ridged an art form and found a new love of artistic expression in photography.

During her high school years she won numerous contests including Scholastics arts and an NFAA award she attended the School of visual arts where she earned her BFA and was then ready to take on the art world as well as pop culture.

Yana has contributed for various publications such as the Fader, Vanity fair and Nylon magazine to name a few. Her work has also been featured in W, Zoo magazine and Modern painters.