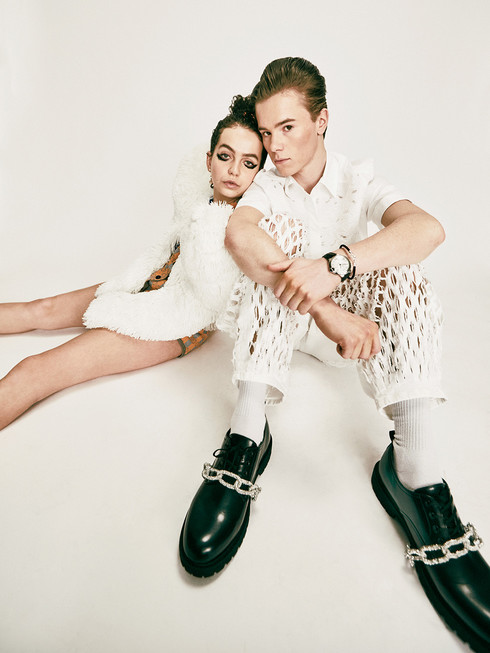 Wilma Lidén and Edvin Ryding are two of Sweden's pioneering young actors, both starring in two of the most talked about TV series at the moment. In this two parted interview with Odalisque Magazine, Wilma and Edvin open up about their long time friendship, finding love both on a personal and a professional level, and on how to support one another and finding inspiration in the ever-changing character world of acting.

J: Can you please tell us how you both got to know each other?

W: We got to know each other in 2014, in an apartment in Flemingsberg in Stockholm for a test shoot for the short movie If everything was real.
Both of us later during the production fell in love with each other without knowing that the other one also had a little crush.

E: Yes, they were looking for an actress to play the role of Linda, and luckily Wilma got the part. We shot the movie that whole summer and had the time of our lives. It’s a pretty dark story but we would laugh between takes and act like the kids that we were. It went almost 2 years after that, then we got to play against each other on the 3rd season of “Gåsmamman”.

W: Oh I will never forget this. After all the film festivals with the short film, the first thing I had to do was to shove chocolate into Edvin’s mouth and beat him to the ground. It was a fun contrast to that summer we had 2 years earlier. Although I did that scene pretty aggressively 10 times, we still remained best friends and had a lot of fun during that shoot too.

E: Haha yeah I had to brush my teeth for twenty minutes afterwards because of all the chocolate.

W: After that we did Julkalendern in 2018
(the Swedish Television Christmas calendar show) and that brought us closer than ever. This was a way happier story than the ones we had done together before. Only cute things and snow and glitter.

J: Both of you started your acting careers at a very early age. When did you know you wanted to work with film?

E: Both me and Wilma started our careers as actors at a very young age.
I always had a passion for acting and thought it was very playful and I used to act a lot just for fun. I ”played” in that sense until I was about 11 years old. I used to set up all different kinds of acts both when I was alone and for family guests. like the soccer World Cup final, putting up goals in the backyard pretending I was a football player, winning and doing winner interviews with myself.

When I was a kid, I used to set up small acts for the dinner guests at home as well as using a doll house meant for puppetry. The ones with these small windows and curtains you could open up. This was perfect for me since I was so small, I could have my tiny shows from there.

By coincidence I came into an industry where you kind of get to play everyday with likeminded people. Realizing that this actually was a job around 14 years old It went from this is fun to I want to continue doing this and I knew that this was what I wanted to work with in some way for the rest of my life.

W: My first role was for a commercial.
When I was around 5 or 6 years old I told my mom “I’m going to be an actress” and obviously she didn't really believe me and responded “ooh but you wanted to be a dolphin trainer a year ago” and thought it was just a phase.

W: No, luckily!
I’ve always liked to study people, explore ways to implement character traits and play other characters. When I was younger I used to reflect a lot like
“if you can live this way, what would happen if I try that for a day?”. And I did.
My acting created a bit of a mess at pre-school I’ve heard.

Then when I was old enough, I kind of forced my mom to write me up for a casting site for actors and shortly after that I got my first commercial job.
It was for IKEA, and I have very few memories from my childhood but I specifically remember fragments from this day.
My mom drove me to the set where we were going to shoot the commercial  and when we came there, there were all these cranes. We thought they were construction cranes and I remember my mom said “Oh, it looks like they’re renovating here, how will you be able to film” and when we came up to the set we realized that all these cranes were for the lights. It was very exciting for me as a little kid to see all the effort and work behind the cameras and the only thing they expected in return was for me to play around and eat Kinder eggs and hide in IKEA furniture.
How could I even consider a different work environment than this?

J: Do you think that you would have been drawn to each other and developed a friendship like this if it wasn't for acting? And do you get support from each other in matters concerning your work?

W: We will never know the answer to that question. But the odds are low!
Edvin is one year younger than me and we are from completely different parts of Stockholm. I mainly have older friends and the mutual friends or colleagues we get to know are either from work or people we met together.

E: We would have also been two very different people if we hadn’t worked with what we do today. We get an incredible amount of support from each other.
I think friends in general regardless of profession give a lot of support, but it's of course different and you share a deeper understanding for each other when you share something like work in common.

W: Absolutely, me and Edvin can sit and chat and research all kinds of different subjects, eras or individuals for hours. Edvin is one of the few people that I truly can feel transparent with. We talk almost every day and if we don't, it's like time stands still until next time.
I think it's an essential factor in an extremely good friendship to be able to be completely effortless in each other's company too.

J: How has your private life been affected by the attention you received from an early age?

W: That’s a hard question, because I don't really know who I would be without it.
However, I do remember the first time someone stopped me on the street because they recognized me. It was a car with a bunch of guys pulling up to the sidewalk where I was walking and shouted “Is it you from Torpederna? We love you!”. I literally thought I was going to get kidnapped.

E: When you get a lot of attention from an early age, it's harder to separate the intentional feelings from the people around you. Especially when it comes from people you don't know. I think it's easier to appear arrogant then, but that's more rooted in insecurities or need for privacy. Of course it's a big difference between the attention I received before and after Young Royals was released but I hope that It never made me arrogant.
Attention has its pros and cons. It opens doors and you get to meet people that you may never have met otherwise and people that truly inspire you.
The down side part must be when it goes overboard, like people you don't know showing up at your house.

W: I think we both have learned how to recognize when someone actually wants to give you genuine appreciation or when they just want to get your attention.

E: Exactly, it's very captivating when people show their appreciation. Once, I had a fan come up to me after Young Royals had been released, to tell me that the show had helped that person come out. It made me very happy to hear that it can also help and have such a huge positive influence on other people.

J: Do you ever feel insecure to be on set or acting?

W: I was never that person who liked to talk in front of the class.
I even got an F on my national school test in Swedish that was mainly based on the fact that I couldn't hold a speech in front of my class.
But as soon as I'm on set all of those insecure feelings are just gone. Of course you doubt sometimes, but doubt keeps you making progress.

E: I've never really had any problems speaking in front of my class or on set. Sometimes when I work I get more aware of my surroundings.
I rarely get disturbed, but more conscious of all things going on around me. Like how to angle my head in a way so that the light falls on my face correctly.

E: Yes! As soon as the clapper board goes off everything just disappears and I’m just in the moment. It's amazing how it can be like that, it's like going into some sort of trance state of mind.

W: That trance is my favorite place.
My friends often ask me if I feel insecure during intimate scenes, and I've reflected a lot about those kinds of scenes and the fact that they usually minimize the amount of people in that room to make the actors feel more comfortable. For me, it’s bizarre to think that I wouldn't feel comfortable, I feel like I’m just in the moment but on the other side of the camera there’s like 50 people feeling awkward.

E: Yes when you look at it like that it's not so abstract anymore.
Everything gets more concrete - they watch me when I'm half naked here making out with my colleague. That's a little weird haha.

J: Where do you find inspiration and creativity for your work?

E: Everywhere! I get really inspired by all the impressions around me.

W: We have a disease… To take in all the impressions around us..
I love to sit on the bus or metro, without headphones and just soak in other people's behavior.

E: Yes, I think we both really like to study and analyze people we meet everyday. That's one of the ways for us to get inspired and get interesting character traits for future or current roles.
But I also get inspired by a lot of books, movies and small side characters.
I think it’s very fascinating to live a life where you get inspired by the everyday impressions around you and get to create something out of it.

W: If I have a role that I feel that I need more inspiration for, then I do more specific  research and watch documentaries or read books from or about that specific era. I trust my intuition a lot too. 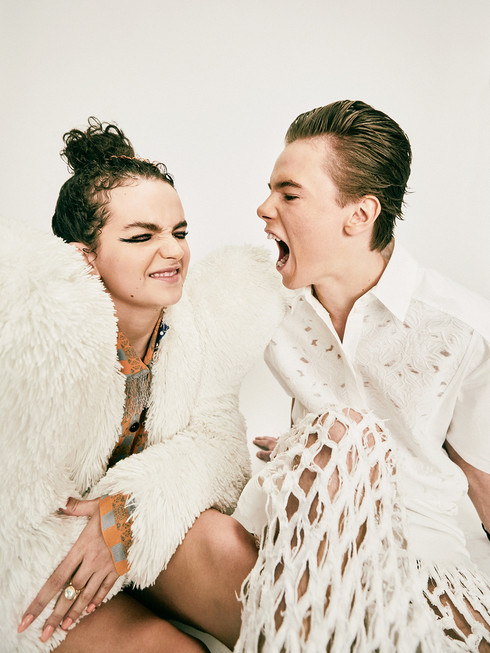 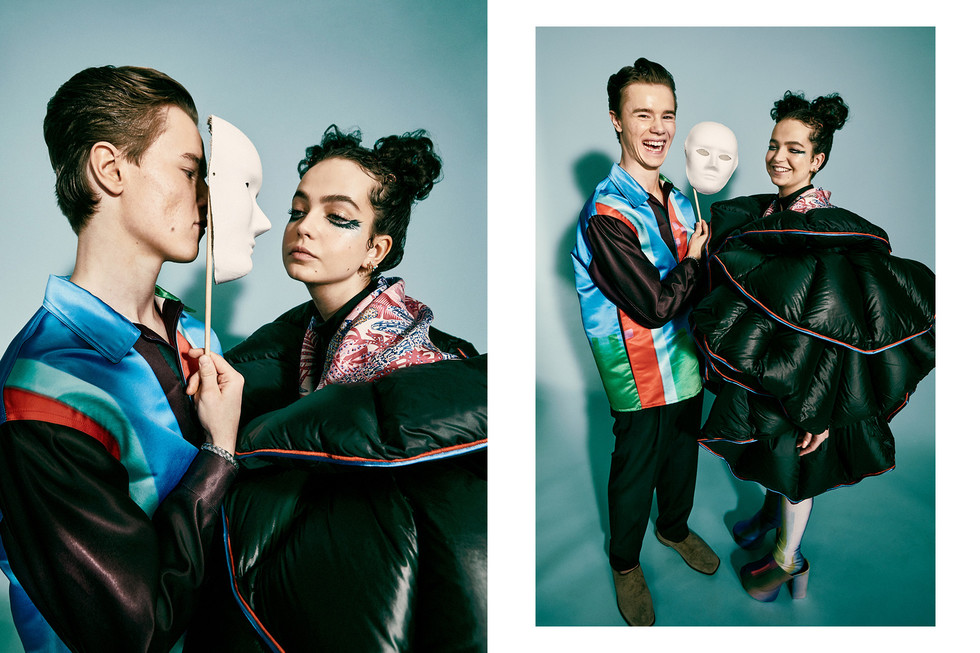 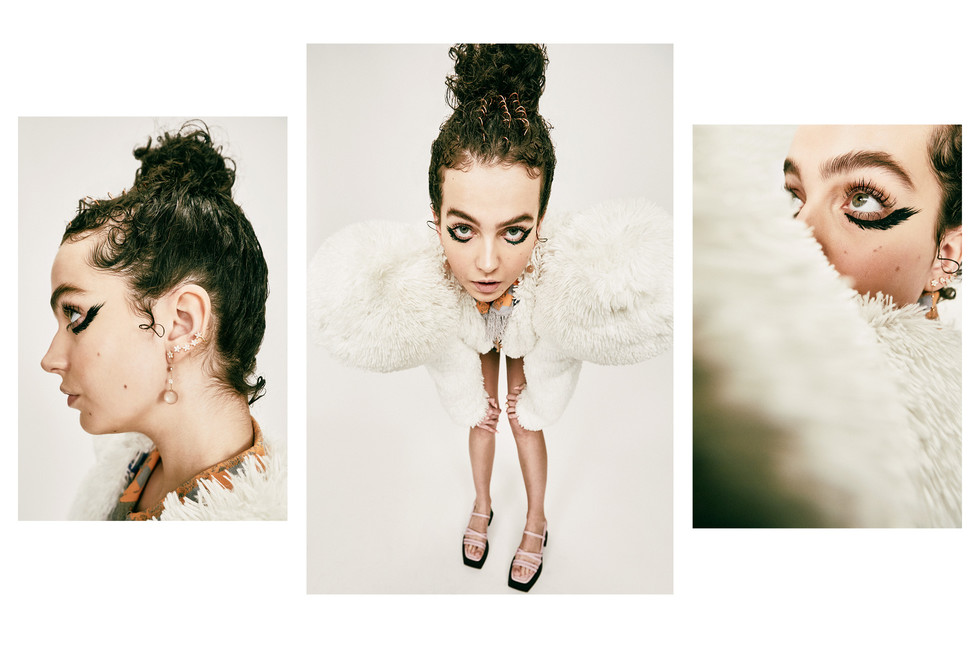 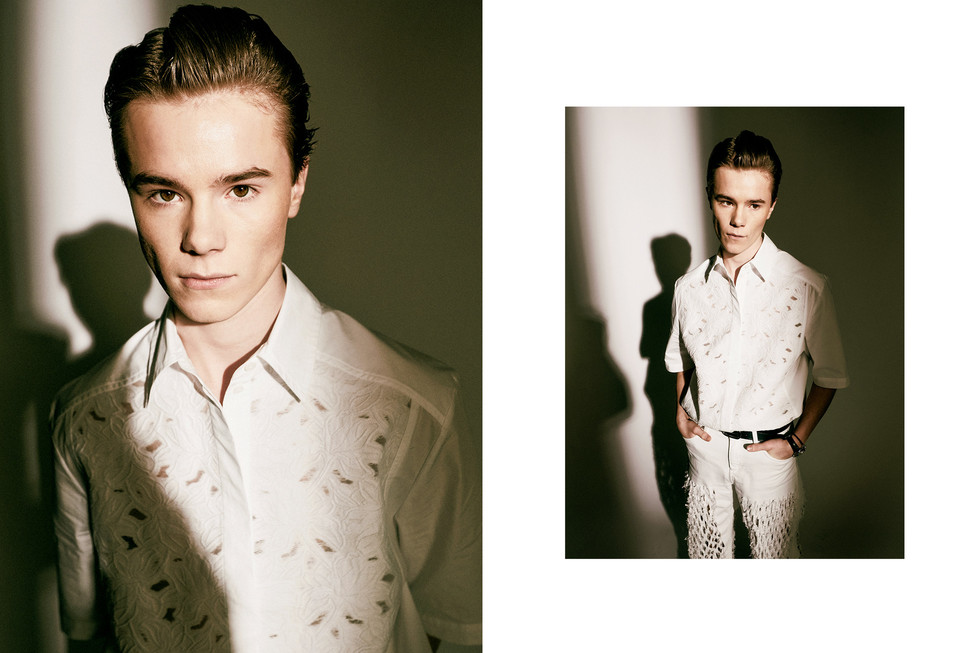