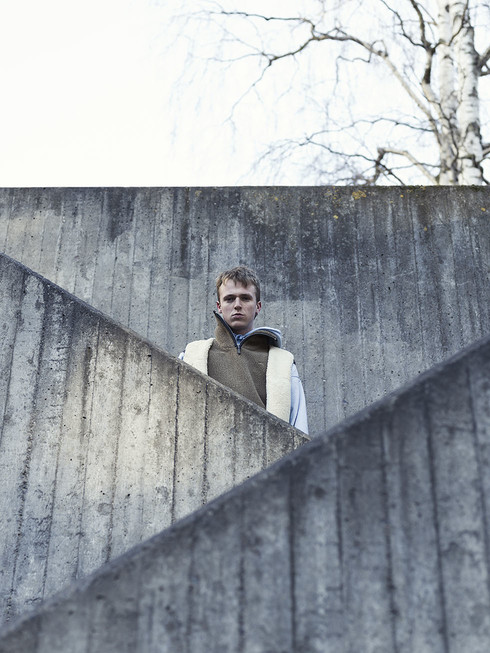 He brings nightlife into the art space through performance and installations, but conversely, does experimental art projects inside his nightlife arena.

Esben Weile Kjær, known as a DJ, party organizer and activist, creates and fulfills our constant need for reminders about how we are all connected - without demeaning or underplaying our individual differences and site specificity.

Through arts events and his refusal to limit his expression to one medium or approach, Esben, with his sister Anna Weile Kjær and other collaborators, explores the importance of subcultures or community.

– I want to examine how strong a cultural identity can be, he says.

He and his sister are now working on a show, which you can experience April 27th in Copenhagen at Future Suburban Contemporary.

Odalisque was able to ask Esben Weile Kjær some questions about his life and artwork.

CK: Can you tell me about your background?
EWK: I am originally from Aarhus but I moved into a squat in Copenhagen when I was sixteen. I was doing activism and went to punk concerts and had a lot of fun.
My DJing began in my hometown with one of my best friends. We played at some parties where the organizers were letting us in from the back door because we were way too young. It was really cute – our parents picking us up after the gig.
I remember how fascinated I was by the energies at the club. I think that maybe it was the same that I found in the punk scene - like how music can transform the space totally and be a strategy to let bodies act differently and more autonomously.
Of course, I was too young to get into the clubs and that’s why I started doing my own parties. My friends and I got some help from some older friends and we did some of the first queer raves in Aarhus.
I don’t know how queer they actually were but we felt it was super queer at the time and maybe that is enough when you are 15 years old and you don't know anything about sexuality and gender and the only thing you want is to instantly run away from categories and norms.
All this was a big inspiration and is now a big theme in my art practice. The movements of youth culture and the aesthetics of different sub cultures, and how pop culture all relate to each other. Subcultures can mutate really fast - through capitalism - and be something else.

CK: Please talk about the difference between your subcultural educational experiences and more mainstream arts education background.
EWK: When I moved to Copenhagen I thought that I would never go to high school. But eventually I attended one anyway, called Det Frie Gymnasium (Free High School). The school looked like a squat and it was a democracy - all of the students had as much to say as the teachers. Study there changed my mind of being a part of an educational institution. I felt comfortable and happy staying there.

Right after high school I started at the Rhythmic Music Conservatory and meanwhile, as I studied there, my practice changed into something that was more comfortable in an arts space rather than a concert hall. So, I started exploring culture studies, performance theory and music theory through the ideas of sound. I have a BA from there, but now I am at an art academy which fits me better.

CK: What groups and communities has inspired your work?
EWK: I'm inspired by movements and subcultures and how they are communicating. I have been djing in 9 years now and have been playing in the most of the world. Visiting all the different clubs has been a kind of research that I use to produce art. Of course I also look at other artists. I'm a big fan of Mark Leckey, Evian Christ and Juliana Huxtable to name some artists who also have a DJ background and use it in their art.
I can also name The New York based collective that were active in the 90's called Group Material. I am excited about how they used the art spaces as a social space. At the moment I really like the Spanish artist Antoni Miralda. I'm really interested in how he works with participation in he’s work. But this is only a few I like, the list could be forever.

CK: What is your planning method for your projects?
EWK: A lot of my research is from art theory and discussion with my sister who is an art historian. She has just finished a thesis about rave culture, and how its’ aesthetics have been implemented in the art world and have affected pop culture. I am reading a lot, going out, and am studying issues close by.
For example in my performance How 2 Neo-tribe that was shown first time at Tranen Contemporary Art Center, I wanted the purpose to be questioning the identification of the attendants. I created flags working as ID tags for individuals at the show, each being a label of subcultures around the world. These flags were going around the exhibition space on people walking around and were a part of the performance. The labeled subcultures interacted and moved around depending upon who was choosing and adopting the identification on the label. There wasn’t a set plan or choreography. Humans are already naturally really choreographed without planning. That’s a method I often use. To add some elements or rules on a social situation that already exist.

CK: Do you prefer collaboration or working individually?
EWK: My practices are really social. I prefer to work together with other people. I’m interested in the collective. A big part of my practice is to do interventions of other institutions. You can maybe call it brand hacking. I try to fade into the structure of the place and use the way that they advertise (can be on social media for example) as a place for art. I did one last year called Institute for Success. It was a performative intervention where I acted as a curator and invited different performance artists to show pieces. Now we have turned this “Institution” into an art collective of seven artists and we will do a new intervention called Institut for Success 2.0 at the National Gallery of Denmark the second of June.

The person I have been working with most, and still do, is my sister. We have been writing and organizing anthologies. Some months ago in fact, we had a show in Basel called Radical Togetherness. We also run an exhibition space together called Adult in Copenhagen together with our dear friend Mikkeline Sofie Larsson.

CK: You also like to photograph the people around you?
EWK: I do love taking pictures of my friends. Now I am starting to get asked by friends and art connections to photograph them. I really don’t see myself as a photographer, but I really like portraying specific people. I don’t really know why or what will come of it eventually, it’s a personal project for now. I see my portraits as a family scrapbook in a way, with nice memories.